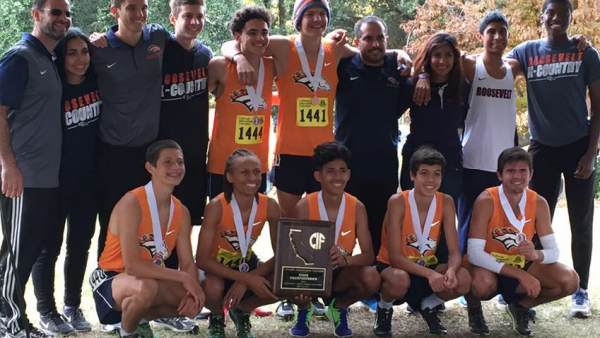 ​Your ERHS Boys team headed up to Fresno on Black Friday with some complaining about missing out on the deals they could be getting right then but then realized on Saturday morning that the best deal of the weekend was a 3rd place Finish in the most competitive division in the state of California and Medals around their necks!
When we arrived to the course the boys seemed relaxed and in good spirits as you can tell by their picture below in front of the State CIF banner. When doing our run through of the course they paused and listened when pointers were given by Coach Robles and Coach Cummings as this was their first time ever stepping foot on the historical course at Woodward Park in Fresno, CA. It didn’t seem to phase them on Saturday morning once the gun went off. Going into the race your boys team was ranked #3 in the most current CA State Div. 1 rankings and were just currently ranked as the #20 team in the USA according to DyeStat Flo 50 Rankings. Boys went to bed ready for Saturday morning.
The boys woke up bright and early to get some food in their systems and get ready for their race later that morning. The boys were given their jerseys, numbers and chips and got their stuff ready at the hotel staying nice and warm from the 50 degree weather outside and the 60% chance of rain. Luckily we avoided that weather (until we drove home) and the boys got in a great warm up and were ready to go come 10 am.
​The boys got out well to start their race with Raymon Ornelas and Tyler Spencer getting with the front pack from the beginning of the race and never letting go. Raymon and Tyler have been our 1-2 punch all season and Saturday wasn’t any different. They finished within 7 seconds of each other with Raymon taking 11th overall, missing an individual medal by 1 spot and Tyler followed in 16th place, both running the 3rd and 4th fastest times in school history on that course. Raymon missed the school junior record on the course by 3 seconds!
One of the most impressive efforts of the day was by our own Raul (Tony) Chavez who was the fastest freshman in the Div. 1 race and was the 2nd fastest freshman in the entire CA state meet with all results combined!!! He also ran a 15:54 which ties him for the 24th fastest freshman time of all of time on the historic Woodward Park Course!
Another impressive fact was that our #4 man on Saturday was one who we thought we had lost for the season back in July, Wayne Richards, who put together probably his best race of the season on the best day to help the team secure 3rd as a team since our normal #3-4 runner, Isaiah Madrigal, finished 7th for us on this day. One of the HUGE benefits of have a group of boys so close in time, you always have other boys who will make up the difference and boy did they! Julian Robles rounded out our scoring 5 with freshman Michael Sahagun not too far behind.
​As the boys hugged each other for their efforts the coaches continued to refresh their phones for updated results along with the Press Enterprise sports Editor who was also curious of the teams finishing place since it looked like it was close. Once Coach Robles got the official results he made the boys aware that they made the podium by yelling “Woooo.. third place in the state baby!!” The boys team yelled and hugged and the parents shed tears of joy. The picture below is the team after hearing the news being joined by old coaches, alumni and friends.
The boys walked onto the stage with huge smiles and school history made. Their team time from the day was the 90th fastest team time ever ran on the course over its decorated history only rivaled by Mt. SAC here in CA. Their team time is equivalent to the CA North Coast Section record to show you how impressive their team time was. Only 5 other Inland Empire schools have ran faster and it was the 5th fastest team time in Riverside County History. The top 6 boys all made the all time list with their performances in Riverside County History as well! Raymon #20, Tyler #30, Tony #54, Wayne #89, Julian #96 and Michael #110… and again.. 5 of those 6 come back next season! 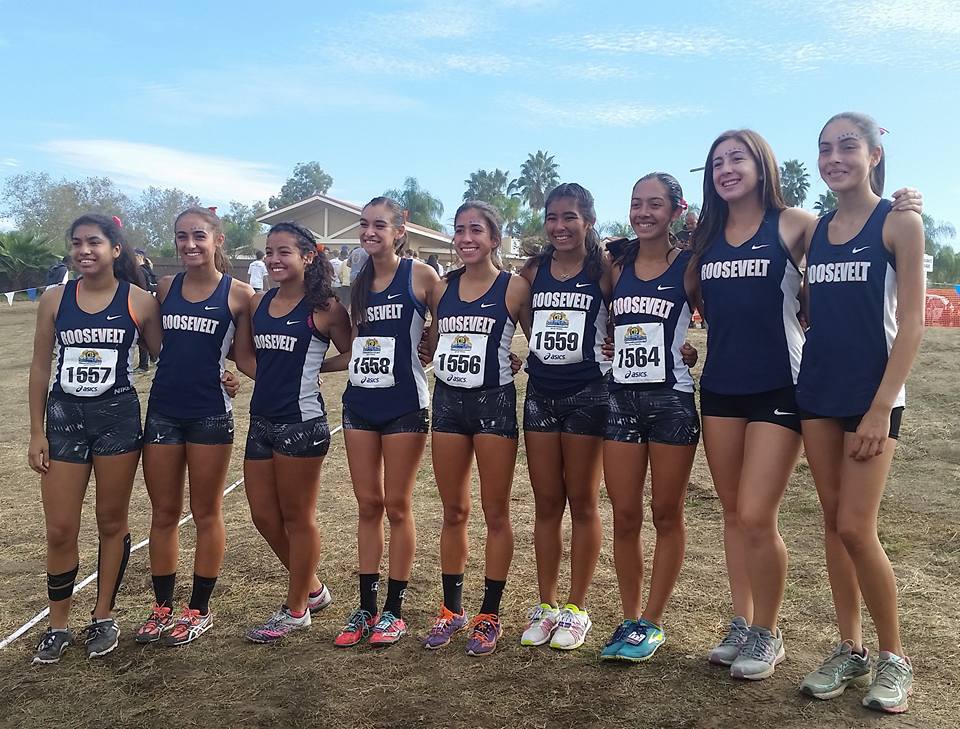 ​Your girls XC team placed 16 out of 24 teams while competing without their number 3 runner due to injury but saw outstanding performances and personal records for all of those who competed. The girls were led by outstanding freshman Abigale Rippe who finished first for your Mustangs and placed 53rd overall. A step up performance came from senior Brittany Marrero who ran over a full minute faster from prelims (19:45) to finals (18:48), which is also her personal best over the 3 mile distance, finished 2nd for your Mustangs!  Junior Paloma Barron was our 3rd finisher and Senior Crystal Valiente was 4th. Rounding out the top 5 for your Mustangs was Senior Jillian Guzman who had the biggest PR of the day. Jillian dropped 1:15 from last years time to run a great time of 19:34 which is also an all time personal best over the 3 mile distance! Not too shabby! We are extremely proud of our girls and the effort they put forth in their last race of the season.
Powered by